Article Analysis: “Is College for Everyone?”
Economic Review of the Wolf of Wall Street
Cartoon Remakes

“Bimbo’s Initiation” and “Popeye the Sailorman: Can You Take It” are the two cartoons which were produced by Fleischer Studios back in 1931 and 1934, respectively. These cartoons utilize different animation styles and characters, but it is possible to identify several similarities between the two. Many critics regard these two works as masterpieces that are worth studying. The central objective of the current paper is to analyze and compare the various aspects of these two films.

The studio has utilized the drawing styles that were prominent at that time, and quite similar to the techniques used by Walt Disney Studios. The design of characters in “Bimbo’s Initiation” is clearly an attempt to mimic the success of competitors. However, it is clear that cartoons’ creators tried to come up with a distinct approach towards animation, and have managed to accomplish their goal when they released the second film. One of the most significant aspects worth noting is that artists have used different artistic styles when drawing characters and backgrounds in this episode of “Popeye the Sailorman.” Objects in the background appear to be much more detailed and more realistic. On the one hand, this approach creates a unique visual experience, and it is clear that they intentionally utilized this technique. It seems like creators wanted to put characters from comics into a real world. On the other hand, the style in “Bimbo’s Initiation” is much more consistent. However, it is clear that artists have utilized a similar approach, and backgrounds have more details than characters. Creators had to focus on facial expressions in both cases to visualize the feelings and emotions.

Both cartoons have moving background scenes that make animation appear much smoother. For example, viewers can see Bimbo walk through the street during one of the opening scenes. However, it may seem like he stays in one place and the background picture moves instead. The provided figure illustrates the use of moving background technique (see fig. 1). 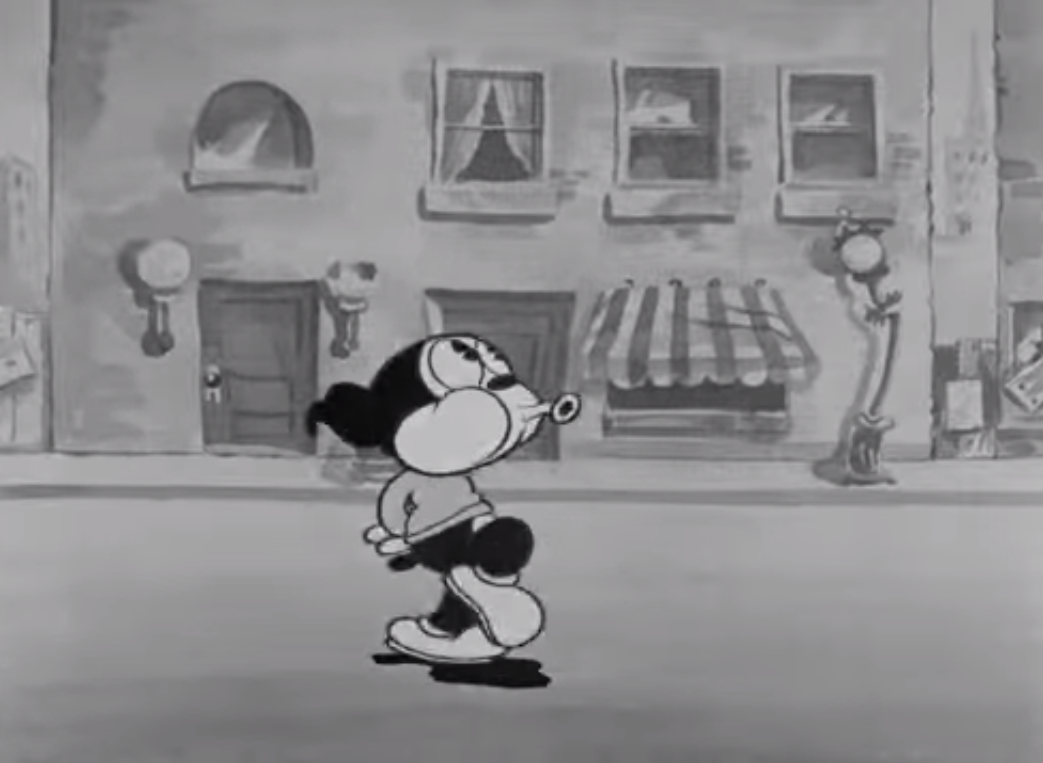 However, the sequence is not that simple, and animators made him step on sewer holes to make the scene much more entertaining. Similarly, the studio has recycled some of the animations during the creation of “Popeye the Sailorman.” The attached figure illustrates the use of recycled animations (see fig. 2). 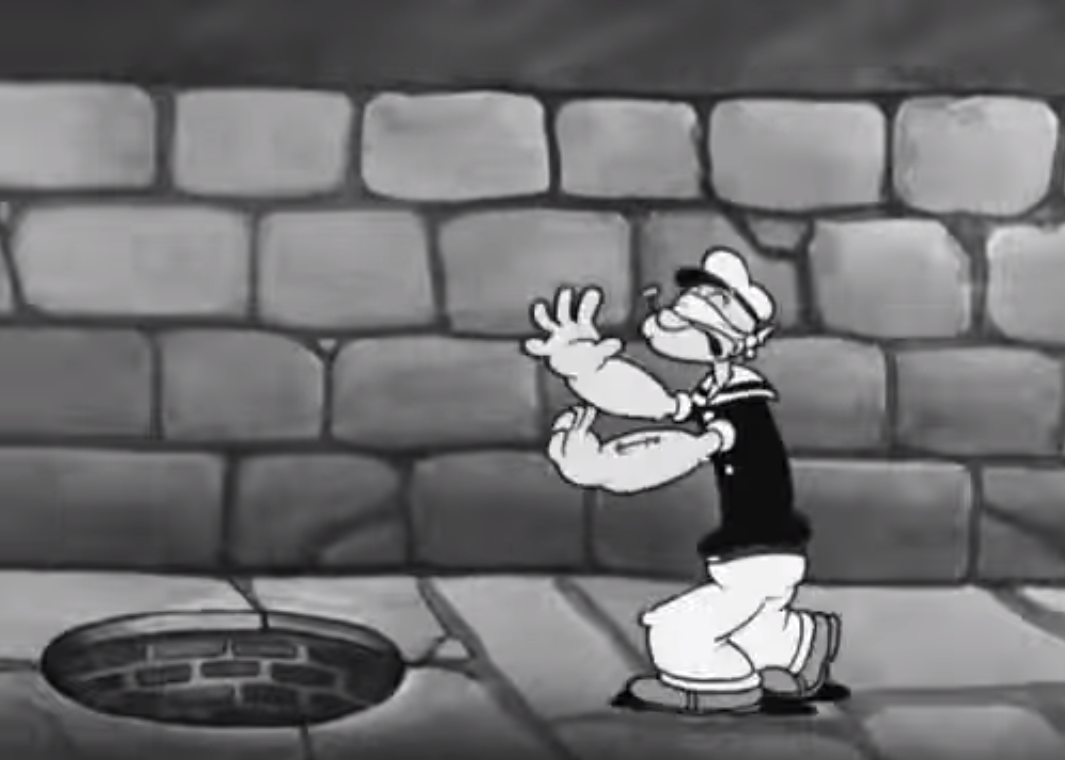 Fig. 2. Popeye the Sailorman: Can You Take It.

Creators utilize such techniques on numerous occasions, and they are not hard to identify for most of the time, because characters do not change their facial expressions and repeat the movements. Moreover, this approach is quite understandable because it may require a lot of time to draw every frame separately, and animation technologies were at an early stage of development back in the 1930s. The studio could also utilize them in other works in order to maximize the work efficiency.

The first cartoon is much more creative because it contains several subtle references and hidden meanings. It mocks secret societies and some of the rituals. A story treatment was of the utmost importance in this case because the director wanted to cover all of the central ideas. One may have to watch this cartoon for a few times to notice all of the symbols and analyze their meaning. Therefore, adults may also enjoy this work because of its unique atmosphere and surrealism. It is possible to state that some of the scenes are inappropriate, but studios did not have to deal with severe age restrictions at that time and enjoyed creative freedom. Another factor that is worth mentioning is that the company has utilized a character that is very similar to Mickey Mouse and Betty Boop. The first one has a minor appearance, but the second one plays an important role. Additionally, it is clear that creators were not quite sure about the direction of the character at that time, and have tried to experiment in order to determine the looks that will be impactful and easy to remember. The ending of this cartoon seems unreasonable and unrealistic, but it has a long lasting impact because it is impossible to predict.

The cartoon about Popeye is relatively simple and lacks depth, but the studio minimizes this weakness by focusing on animation and action. The company was not afraid of experiments and has utilized various effects to make the scenes much more impactful. One may argue that the animation in this cartoon is rather shaky, and it seems that creators have skipped many frames to make the work much easier. Some movements are smooth, and others are snappy. However, this approach creates a unique effect and differentiates this work from many other works. The intended audience of this film consists of young children and teenagers. The script is not that creative, and it is evident that the studio did not have to use a detailed story treatment because the focus is made on the action sequences. Moreover, it is entirely possible that such actions were intentional because producers wanted to create a unique style. Shadow animations are similar in both cartoons. Sometimes, they are not smooth, and artists wanted to draw the attention to the way movement affects silhouettes. Additionally, the way creators have demonstrated the interaction between shadows and a candle is truly outstanding.

Some of the scenes are weird, and layout artists have used the distorted perspectives in “Bimbo’s Initiation” to enhance the experience. Artists have utilized the deranged animation to highlight the absurdity of the situation and show the impact that such stressful events may have on an individual. The way creators used layouts in “Popeye the Sailorman: Can You Take It” is also very interesting. A viewer sees all of the scenes from one perspective most of the time, but, in some cases, the camera moves in the most unexpected directions. For example, Popeye walks towards the viewer during one of the scenes (Fleischer, “Popeye the Sailor Man: Can You Take It.” 2:40). This approach is incredibly innovative and it highlights the creativity of the director.

On the one hand, both cartoons mock the challenges that are associated with groups of that time. Popeye made a decision to join and understood what circumstances he could face. On the other hand, Bimbo had to deal with cult members that tried to force him to join via threats. The similarity is that both characters have to go through a series of dangerous situations, but Bimbo is the one who did not have any significant injuries in the end. The situation is quite comical because creators portray Popeye as an incredibly tough person, and Bimbo is a cartoon dog who acts cowardly at times. Even the sailor cannot handle some of the challenges he faces because they are intentionally irrational and dangerous. Therefore, he has to eat spinach to overcome all of the difficulties. It seems that Bimbo is incredibly lucky to survive through some of the challenges. However, creators revealed during a final scene that a cartoon dog was not in a danger because one of the cult members is Betty Boop (Fleischer, “Bimbo’s Initiation.” 5:40). Moreover, it shows that the initiation process may seem quite challenging at first, but a person that goes through all the steps of the process will certainly enjoy advantages of the membership.

On the one hand, it is possible to state that these two cartoons are similar, but the studio made an enormous progress over the years and improved the overall quality by the time they released the second cartoon. Bimbo’s Initiation is much more creative when it comes to animations, a direction of the story, and facial expressions. On the other hand, artists had to deal with several limitations when working on the episode of “Popeye the Sailor” because of the franchise. Overall, both works have their own strengths and weaknesses, and it is nearly impossible to select the one work that is better. However, it is clear that “Bimbo’s Initiation” required much more effort because of its small details and underlying meaning.